Free shipping to the UK on orders up to 2kg (applied automatically).

Possession, a Daemonic Card Game, is a dark-fantasy, turn-based card game for one to four players.

Each player takes on the role of a Daemon from below, fighting a war that has been going on since time immemorial, since before Mankind arrived to these lands.

We funded on Kickstarter in December 2018. 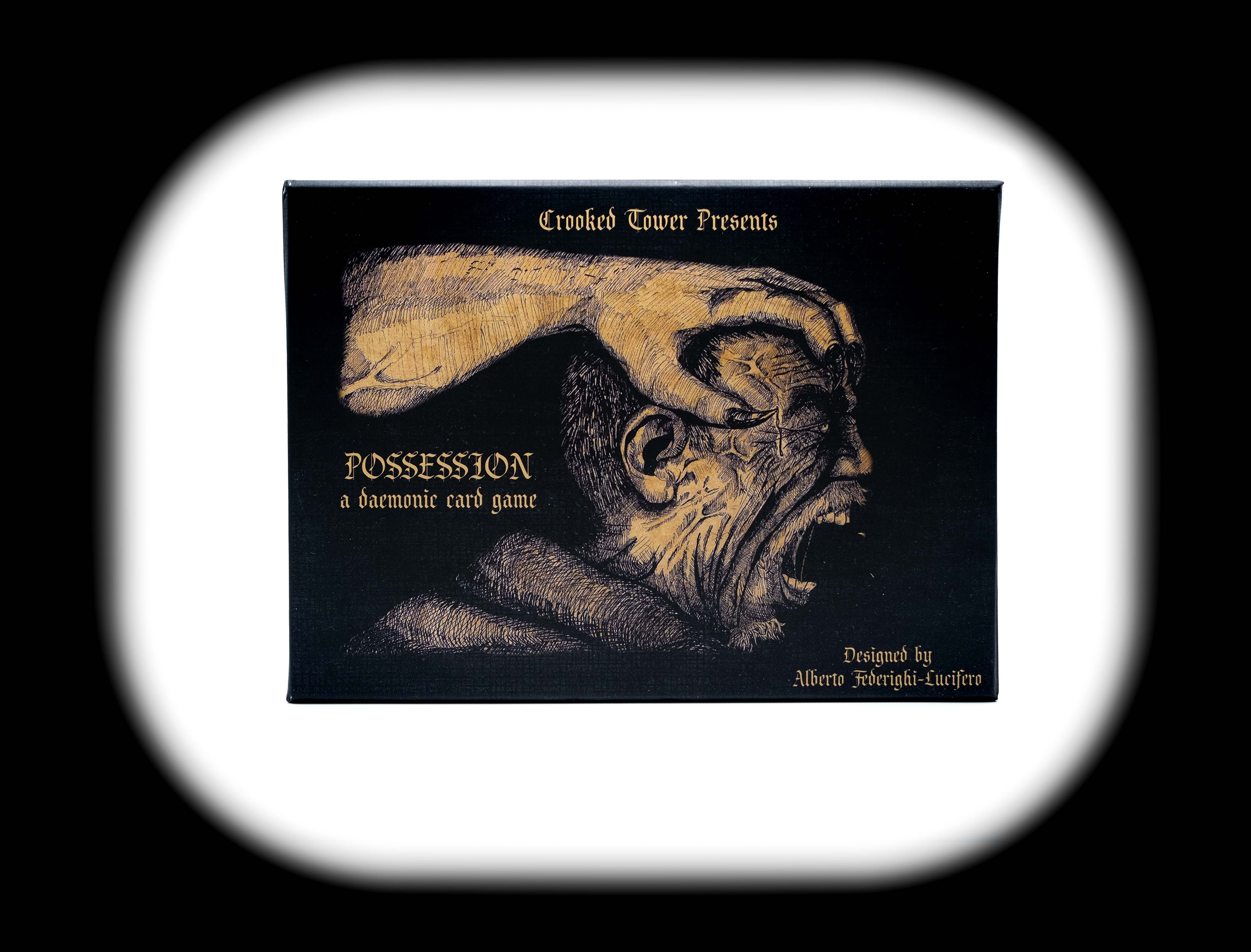 Stalk the streets of the city of Ninebridges, or lurk in the countryside, ready to possess as many mortal victims as possible while chance and fate conspire against you, or possibly give you that bit of good luck that will nudge you towards triumph and power.

Whether in a busy market place, a crumbling building or an undead-infected graveyard, commoners, merchants and nobles are ready to do your bidding (if you are powerful enough to use them as puppets) while the constabulary and powerful, noble heroes will try to put a quick end to your misdeeds. Grab powerful weapons and armours to defend your mortal puppets, but beware of saintly artefacts and strong alcohol, that might strengthen their resolve against you!

You can read a review on Big Boss Battle. Here is some of what they had to say:

‘A hell of a lot of detail has gone into creating the game itself, and it shows.’

‘There are a number of ways to play too which is nice – you can play single player (though I didn’t get a chance to try out this way of playing) and there are also various campaigns you can play through which offer a little bit of story and progression. I recommend playing the campaigns through with the full four players though as they can get pretty difficult.’

You can read about Possession on Both Sides of My Table. Giles had this to say about the game look:

‘The game looks like a snippet of life ripped right out of the dark ages. There is a distinct feel of ancient malevolence without an overly graphic visual.’

Here is how he described the gameplay:

‘A theme of daemonic possession does not suit everyone but as the game is less about Daemon theology and more about a slightly more abstracted strategy/hand-management, the theme becomes less about horror and more about challenge.’

‘As such, with no respect for the human soul of BSoMT’’s 1d8 die, Possession takes full control of the die and forces it to roll a (7)…and this is based on the base game.’

The Board Game minimalist also did a preview of the game and had this to say:

‘The originality of the game makes it harder to draw a very clear comparison to another game — but if you enjoy the theme, and want to take the walk on the demonic side, then this unique and meaty (no pun intended) card game may be well worth checking out!’

Board Game Inquisition did a kickstarter preview of the game.

The video below shows the prototype, we are working on new material showing the final game and showing more gameplay.

Possession, a daemonic card game, is played between 2 to 4 four players, usually challenging each other, but sometimes forced to collaborate in order to overcome powerful enemies and dangerous situation (there is also a solo mode for the game that has slightly different mechanics). The game also has a campaign mode with 11 missions which add a cooperative element to the competitive play: achieve the mission objective and the player with the most victory points wins, don’t and everyone loses.

The objective of the game is to be, by the end of turn 5, the player who controls the most powerful Victims (or any Victims at all, if the game has been vicious enough!).

Each player takes on the role of a daemon, each one with a different ability. Players get their hands of cards from the Game Deck, and each turn they play one card at a time, taking turns until they all have played four cards each. In the game deck you find cards like Possession Cards (used to set their value against that of the Victims’ Willpower to see if you have enough power to control them), Equipment to make their Victims better and those of the opponents weaker or harder to control, Events that can dramatically change the course of a turn, and finally Nemeses and Heroes with whom to attack the Victims of the other Daemons.

Victims are drawn at the beginning of each turn from the Victims Deck, they have Life, Willpower and Strength. We already talked of Willpower. Life is how long they can survive before they die, and Strength is the value used to be matched against the Strength of the Nemesis to see who wins a fight. Each Victim has also a special rules that makes them unique, usually related to the specific trait of the Locations.

Each Location, drawn once per turn, represents the setting for the turn. It has a special, unique rule, it tells you the order in which the players will play their cards, what happens to the cards that have not been played (usually switched between players, so think carefully before you play each card, next turn what you didn’t play could be played against you!) and, finally, each location has symbols representing what’s going on there (for example a tavern will show the symbols for the city, if it’s in the city, for entertainment, after all you go there to get drunk, for coins, since money passes hands there). Each one of these symbols interacts with certain victims (for example the Wine Merchant is stronger at a tavern, that’s where he makes his living!), creating combinations that will make sure no two games are alike.

Finally, each turn the Time Coin is tossed to see whether is day or night. Night will create more Victims, day will make the Nemeses stronger.

Once the Victims, the Location and the Time are set, you get to play your cards. Use possession cards to claim control of a Victim (you can control more than one Victim, but you cannot claim more than one at a time), Nemesis to fight and kill your opponents’ Victims, try to dodge bad events and make good use of the favourable ones, increase the Life and Strength of your Victims with equipment cards and the Willpower of the Victims you don’t control with other equipment cards like A Cask of Ale or a Reliquary.

At the end of Turn 5 add up all of your Victims’ Life and Strength to get your victory points total. The Player with the highest value is the winner!

Cards from the game

Possession relies on a number of different cards arrange in three different decks: the game deck, the location deck and the victim deck. 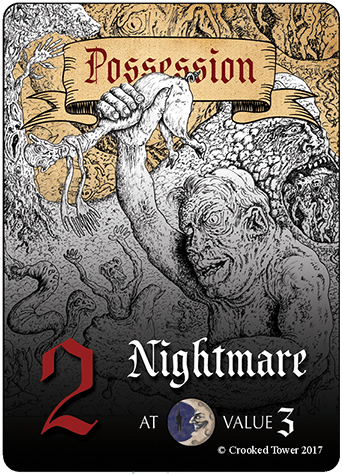 These are the bread and butter of any self-respecting daemon. They increase your Possession Value, allowing you to possess more and more people of Ninebridges, and to keep hold of those you already control as they become more headstrong because of equipment or the holy places where they mind end up. 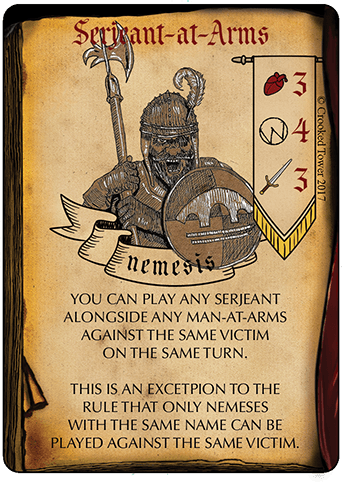 Run! Run for your life! These cards represent the heroes and the local militia and constabulary of Ninebridges, and they are out to kill your Victims before they can carry out your will. Play them against your opponents’ Victims, just like they will play them against yours. 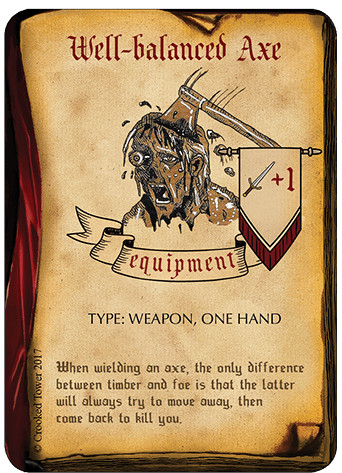 Pretty self-explanatory. Give weapons and armours to your Victims, and equip your opponents’ Victims with holy items, strengthening their willpower, thus making them harder to control. 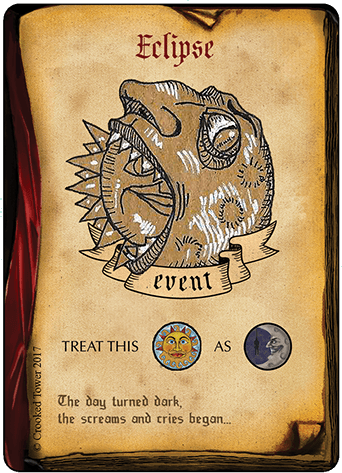 Time to disrupt everyone’s plan! Play these cards to wreck havoc with the other Players’ strategy. Some of this cards will help you escape a nemesis, while other might make controlling some Victims that much harder. 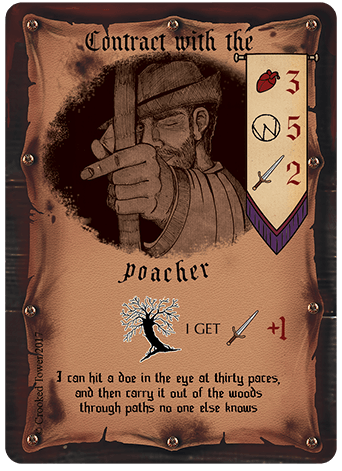 These are the people you need to control to win the game. The more the merrier, but be careful, because just as you try to kill those of your opponents, they will try to kill yours. 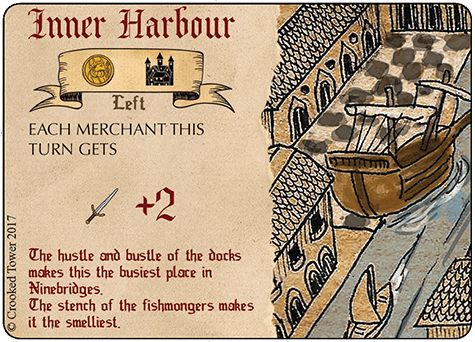 Each turn you draw a Location card which tells you where you are and what effects this place has on the game. Some holy places like Churches and Monasteries may embolden your Victims, making it harder to control them, while some dark, grim, depressing places will just make it much easier to bend them to your will.